By Dr. Manish A. Chhabria,
Manish.Chhabria@rfhospital.org

The concept of Door to Needle (DTN) time in Neurology is used in management of Acute Ischemic Stroke (AIS). It is the time from the arrival of stroke patient in emergency to initiation of recombinant tissue plasminogen activator (rt-PA) drug therapy.

Stroke is the fourth leading cause of mortality and the most common cause of disability and suffering globally (Ref: Kochanek et al, 2011). Majority of the ischemic strokes are caused by vessel occlusion due to thromboembolic or atheromatous processes. 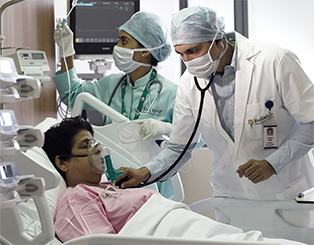 Thrombolysis with rt-PA drug within 4.5 hours of symptom onset is the only approved therapy for AIS (Ref: Hacke et al, 2008) with a class I evidence-based recommendation from the American Heart Association / American Stroke Association (AHA / ASA). The benefit of rt-PA therapy is extremely time sensitive and the guidelines including the AHA / ASA mention (DTN) time of ≤ 60 minutes (Ref: Saver et al, 2006).

The DTN time has become even more important since the introduction of “Time is Brain” concept, wherein research and calculations have shown that each minute in which a stroke remains untreated, as many as 1.9 million neurons and 14 billion synapses die. The benefits of timely rt-PA treatment on AIS is well established. Time-to-treatment has been demonstrated to be an important determinant of 90-day and 1-year functional outcomes in AIS. For every 15-minute reduction in door-to-needle times, there was 5% lower odds of risk-adjusted in-hospital mortality.

The DTN time gets delayed because of either patient or in-hospital related reasons:

In-Hospital related reasons: Incorrect triage, Insufficient emergency room staff or untrained staff in stroke recognition, difficulty with intravenous drips or urinary catheters, difficulty in weighing the patient, CT Scanner preoccupied, financial issues with family, delaying in giving consent by family, delay in transfer from another hospital / institute. Anyone or more reasons are seen in hospitals in developing or even in the developed country. 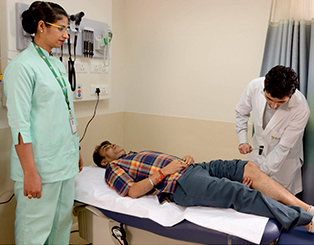 Results from clinical trials and registries have encouraged organizations to set targets for timely initiation of thrombolytic therapy after hospital arrival. The Brain Attack Coalition's target for primary stroke centers is to achieve a door-to-needle time within 60 minutes in 80% or more of patients (Ref: Alberts et al, 2000).

However, it has been reported in studies that less than one third of AIS patients who receive rt-PA are treated within guideline-recommended DTN time, and despite the evidence, there has been only modest improvement in timely administration of rt-PA in the past decade. Some studies have shown relatively prolonged DTN times. The standard treatment with Alteplase to reverse stroke (STARS) multicenter rt-PA study of 57 academic and community centers in the U.S. found a median DTN time of 96 minutes. In the Safe Implementation of Thrombolysis in Stroke-Monitoring Study (SITS-MOST) observational study conducted in 285 centers and 6483 patients in the European Union, there was a mean DTN time of 68 minutes.

However, in the study by Meretoja et al. it has been demonstrated that DTN times of 60 minutes—indeed, much less than 60 minutes—can be consistently achieved. Given this, it is our responsibility to work toward similar results in our own hospitals. However, changing practices may not be easy. For many hospitals, will require substantial changes to systems of care involving not only neurologists, but also others involved in emergency medical services and in emergency medicine and radiology departments.

Our Hospital had conducted a short survey of DTN times of our AIS patients coming to our emergency department from March 2015 to September 2016. Out of the total 126 acute stroke patients who came, 105 (83.34%) were ischemic, rest were hemorrhagic 21 (16.66%). Mean age was 63.1 years, males were 66, and females were 60 in number, 18/105 (17.14%) arrived in window period of 4.5 hours of symptom onset, all these 18 patients received Intravenous rt-PA as per protocol with a mean DTN of 49 minutes, which is well within prescribed time of less than 60 minutes. In our study 44 % of the 105 AIS patients couldn’t reach in window period due to lack of awareness or ignorance of stroke symptoms by family or local practitioners.

On the occasion of World Stroke Day that is October 29, 2015 the Neurosciences, Emergency and Rehabilitation departments at Reliance Foundation Hospital (RFH), had organized an Exhibition & Interactive Awareness Sessions on Stroke, Its Prevention & Treatment, which was attended in large numbers by people from the community and general practitioners. Even this year, we plan to conduct a community outreach program on World Stroke Day, to help people recognize the early signs of stroke and its care.

We as a team, at the department of Neurosciences at RFH, recommend that a certain basic level of awareness on stroke symptoms is created in the community, like using simple “FAST” (Face, Arm, Speech, Time) method to detect the warning signs of stroke and immediately taking the patient to the a nearby stroke ready hospital, creating well organized & tested acute stroke protocols in the emergency rooms of hospitals, and training the medical and paramedical staff in their implementation.

For current and future treatments, we recommend DTN of less than 60 minutes should be the rule – now it is up to us to make this happen!.