Home / News and RFH Newsletters / How Kidney Disease Affects Children
Are your kids cranky, fussy about food and perpetually tired? It could be chronic kidney disease — a condition often misdiagnosed until it’s too late

A bright boy with twinkling eyes with a solid grasp on his studies, Prince Sharma would inexplicably leave his answer sheets blank during an exam. Routinely refusing to eat food, the 13-year-old would often throw up whatever he was fed. When playing cricket with friends, he would collapse in the middle of a run, losing his balance or having his knees give way.

For nearly six years, the teenager from Kamothe suffered this peculiar set of problems, but the local doctors repeatedly failed to make anything of the arguably disturbing symptoms. “Finding nothing wrong with him, the doctors would ask us to not worry, saying our child might only be throwing tantrums,” says Vinod, Prince’s father.

As his health rapidly deteriorated, three months ago, Prince was brought to Sir HN Reliance Foundation Hospital in Girgaum, where Dr Shruti Tapiawala, consultant, nephrology and kidney transplant physician, performed some basic tests that confirmed her worst fears. “The creatinine count, which should have been around 0.6 mg/dL (milligrams per decilitre), stood at more than 8 mg/dL. Prince was diagnosed with endstage kidney disease, which is the last stage of Chronic Kidney Disease (CKD). We had to immediately put him on dialysis,” Dr Tapiawala said.

While Prince’s case might be a rare instance of such abject misreading of telling symptoms by family physicians, children suffering from headaches, perpetual tiredness, poor academic performance, and low appetite could be red flags for serious kidney ailments, say doctors. “Kidney diseases in children may often not show up with typical signs such as passing red urine, passing less urine, or developing swelling all over the body,” says Dr Kiran Sathe, consultant paediatric nephrologist, department of paediatrics, Sir HN Reliance Foundation Hospital. “On the contrary, such children may just suffer from poor growth, poor appetite, excessive tiredness and some bone deformities. Hence, keeping a lookout for signs of underlying kidney disease, and ensuring regular screening, is important in such situations.”

In Prince’s case, nobody could spot it for what it was. When Prince came home with splitting headaches, for instance, the family thought it was because he had been playing in the sun. “His family had tried their best. They were convinced that there was no problem with him as the local doctors had told them so. Why, then, was Prince acting so difficult, his family often wondered,” Dr Tapiawala says.

Since Prince wouldn’t eat well, his family tried to entice him with fast food, such as burgers, fries, nachos and pizza. But his poor appetite persisted, his growth remained stunted, and he still wasn’t putting on weight. At some point, his uncle brought some protein powder from Dubai which they fed him for many months, unaware of the harm this could cause to his ailing kidneys. “They even tried alternative medicine. None of these things worked. Instead, they only intensified Prince’s condition,” adds Dr Tapiawala.

Unfortunately for the Sharmas, their family doctor hadn’t even prescribed a blood test — the very basic measure that might have immediately solved the mystery. “When Prince was brought to us, he was vomiting and practically collapsing,” Dr Tapiawala says. “The only two options before the family were to get a new kidney or undergo life-long dialysis. His mother Gyanti Devi volunteered to be the donor. So we will perform the surgery soon, and Prince will become healthy.”

A testament to his sharp mind, the first time Prince underwent dialysis, he began to recite portions of lessons from his Biology textbook flawlessly. “Prince is a very bright child. A key reason for his poor performance in exams was Uremic Encephalopathy, a condition where the toxins don’t get expelled from the body due to malfunctioning kidneys. Because of this, he was confused and disoriented,” says Dr Tapiawala. “The resulting high blood pressure was a result of stressed kidneys, which triggered frequent headaches.”

Hooked up to a dialysis unit, and eagerly waiting for the session to begin, Prince has a smile on his face. “I have learnt so much about kidneys and health in these last three months,” says the Class IX student. “I also know that for optimum kidney health, we must consume less salt, sugar and oil, and drink adequate amounts of water. I feel ready for the transplant, but I do wish my problems had been diagnosed earlier.”

While the detection of kidney diseases in children in our country is improving, thanks to awareness and better diagnostic facilities, Dr Sathe says timely diagnosis and treatment is vital as this can adversely affect the child’s growth. “Moreover, it has the potential to permanently damage the kidneys in the long term. Children who end up with CKD ultimately progress to a stage where survival is difficult without undergoing regular dialysis or kidney transplantation,” Dr Sathe adds.

The story of 12-year-old Azeem Qureshi is similar to that of Prince. His father attributed Azeem’s unjustifiably quick temper as the cause of his frequent headaches and high blood pressure. “I asked his father: do you think a 12-year-old boy can feel so much anger that it would cause him a severe headache? Azeem, who also suffered from an end-stage kidney disease, was brought in with fits caused by high blood pressure,” Dr Tapiawala says. “What such cases teach us is that family physicians, upon seeing things that are inconsistent or problems that are persistent, must get basic tests done. Recurring urinary tract infections, for instance, might point to a more serious ailment.”

While 50 million people worldwide are believed to suffer from kidney diseases caused by various things, CKD is the primary reason for at least 2.4 million deaths per year, and is now thought to be the sixth fastestgrowing cause of death. Such grim statistics point to how we cannot afford to ignore even the smallest of symptoms, particularly in children.

According to Dr Tapiawala, we are witnessing an increase in additional, lifestyle-related kidney diseases today. “Children who are used to consuming processed foods, and don’t get enough exercise playing outside with other kids, tend to become diabetic, obese and hypertensive, which also predisposes them to kidney disorders. CKD is alarmingly common today in India, affecting one in 10 people,” she points out.

Dr Jatin Kothari, Consultant (Nephrology), with PD Hinduja Hospital, says: “Children who have developmental delays or undertake an antenatal sonography which shows abnormalities in the kidney; have a family history of kidney diseases (siblings with kidney diseases, for instance) or cry excessively while urinating; or are found to have excessive protein in the urine during routine testing, need to be thoroughly examined and treated by a paediatric nephrologist.”

Elaborating on how the causes of kidney disease in children are different from those in adults, Dr Sathe says, “These include abnormal developments of the urinary tract that can be picked up, even in the intrauterine period, when conducting an ultrasound on a pregnant woman. Such newborns need to be monitored closely after delivery, to check for kidney disease. Other common causes for kidney disease in India are urinary tract infections and certain conditions resulting in a leakage of protein and blood into the urine, and could be either genetic in origin, or may result from immunological causes. Many children also suffer from injury to the kidneys when they are given unnecessary medication such as painkillers and antibiotics.”

Indeed, popping painkillers like peppermints, and opting for alternative medicine without studying its side-effects, are dangerous for the kidneys, warns Dr Tapiawala. “We must remember that relieving the pain is not the most important; treating the cause of the pain is,” she says. 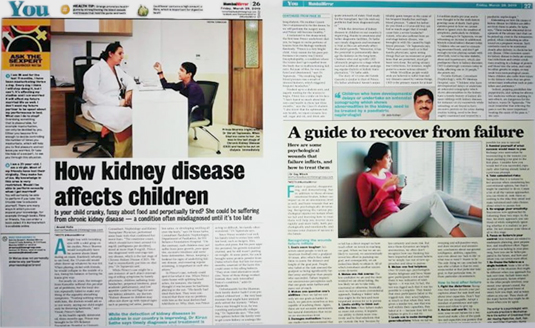