"We are now bonded forever.” Shantilala Rathi, 52, may appear a tad melodramatic when he ends the conversation, but the sentiment is genuine.

The Thane resident’s wife, Rajshree, 50, has got another shot at life, thanks to a Ratnagiri family. Rajshree and Saddam Mhaskar, 32, of Ratnagiri — both of whom were diagnosed with end-stage renal failure in 2013 — underwent a swap kidney transplantation at Sir HN Reliance Foundation Hospital and Research Centre in Girgaum on April 23.

While Shantilala donated a kidney to Saddam, the Ratnagiri resident’s mother, Khatija, 56, did the same for Rajshree.

The swap kidney transplantation is an alternative for patients whose families are unable to donate the organ owing to incompatible blood groups or risks of rejection by the body.

Rajshree signed up for a kidney transplant two years ago, but was put on the waitlist. Enduring dialysis three times a week for the last four years began to take a toll on her.

Dr Shruti Tapiawala, consultant nephrologist at Sir HN Reliance Foundation Hospital, says Shantilala was unable to donate a kidney to his wife despite being a blood match because of the presence of strong human leukocyte antigen (HLA) antibodies in Rajshree’s body.HLAs are markers that an immune system uses to recognise ‘foreign’ cells in a body. The stronger the HLAs, the higher the chances of organ rejection.

As the Thane family began to lose hope of ever finding a donor, the Mhaskars were going through their own hell.

Saddam, too, was undergoing dialysis three times a week.

Khatija was willing to donate a kidney, but the blood groups didn’t match. “We registered for a cadaver donation last year, but we were told that finding a match would probably take over a year,” says Umaira, Saddam’s wife. “We were so helpless.”

The family spent lakhs of rupees on dialysis, temporarily moved to a rental apartment in Sewri six months ago for the treatment and approached many charitable trusts to raise funds. “My husband also has hepatitis C. A week of dialysis cost us around Rs 12,000,” says Umaira. “We kept praying for a cadaver donation.”

Things began to look up in January. Doctors at Sir HN Reliance Foundation Hospital broached the topic of a swap kidney transplant with both the Mhaskars and the Rathis.

Rajshree and Khatija’s blood groups didn’t match, but the HLA test showed that the odds of the body rejecting the organ were significantly lower. Saddam and Shantilala’s tests, too, showed that they were compatible.

The procedure was briefly stonewalled in the face of religious differences. “Both the families decided to sit down and talk it out,” says Shantilala. “Once we got to talking, we realised that religious barriers are, after all, man-made.”

The families underwent the swap on April 26. Dr Tapiawala says although the recipients’ bodies showed signs of rejection in the first three weeks after the procedure, last week’s tests showed a positive prognosis.

The families now treat each other like blood relations. “Saddam is my younger brother. I talk to him every day. He, too, tells me to take precautions against infections,” says Rajshree.

The religious harmony showed in their prayers before the transplant — the Rathis performed a puja for Saddam, while the Mhaskars asked for dua in Rajshree’s name.


“Our blood is of the same colour; people have created religions. When it comes to saving lives, humanity should come first,” says Khatija. 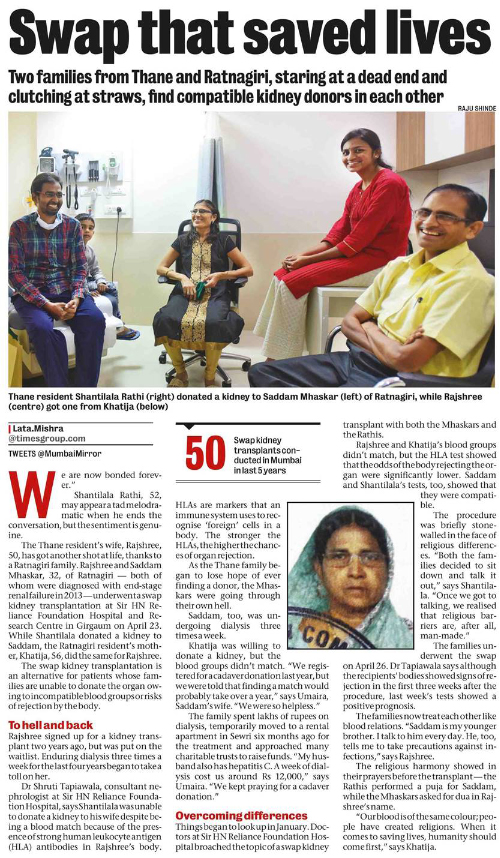