The uniqueness of this surgery is, we operated on a 4 years old female child (one of the youngest not only in the city but also in the country), she underwent Robotic Bilateral Ureteric Reimplantation on 17th October 2017 in our Hospital.

To start with, the patient presented to Dr. Prashant Joshi, Consultant Paediatric Surgeon with pain in abdomen, fever and infection in the urine, she had Bilateral Veico-Ureteral Reflux (Grade3/4). In simple terms her urine was going up back to the kidneys and injuring the kidneys rather than coming out during the act of urination.

The child had multiple episodes of urinary tract infection for which she was admitted and treated medically in various hospitals. We investigated the child and explained about the surgical repair required to prevent further damage to the kidneys. The pros and cons of various surgical approach open, laparoscopic and robotic were explained in detail to the relatives.

In view of the child been female, the parents wanted to do minimal access surgery. Robotic Surgery was recommended due to the associated advantages like precision and suturing in the narrow pelvis space.

There are very few centres, in India and oversease, doing such cases in small children robotically. The surgery was performed on 17/10/2017. The surgical team comprised of myself Dr. Prashant Joshi & Dr. Jeetendra Jagtap. Anaesthesia was given by Dr. Hemant Mehta and team, who managed the patient very well intraoperatively. With good teamwork between doctors, OT nurses and staff, the surgery was uneventful.

Postoperatively oral feeds were started same day at night. The child had no pain & was walking in the ward, next day after surgery. Despite her pelvic surgery she passed urine by herself within 24 hours of surgery. The patient was stable and discharged after 48 hours of such surgery.

This faster, pain free recovery was because of minimal access robotic surgery and early postoperative passage of urine was on account of the magnification and precision provided during Robotic Surgery. 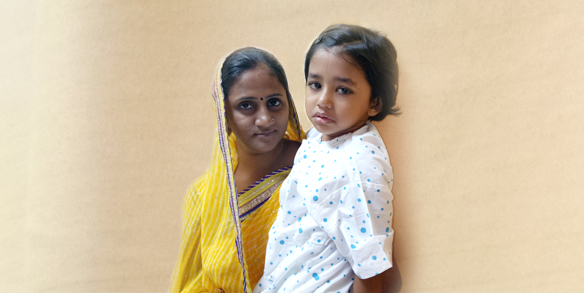