According to Ravi Hirwani, centre head of Wockhardt Hospital in Mira Road, a housewife from Virar collapsed due to a brain haemorrhage a few days ago and was first rushed to a local private hospital. “She was brought in to Wockhardt on December 22. Doctors operated on her but the bleeding in the brain was too severe and she could not recover. They declared her brain dead on Monday at 9.30 p.m.,” he said.

The deceased’s family were aware about organ donation and consented to donate the woman’s liver, kidneys and corneas after counselling. “Her liver was sent to Global Hospital in Parel. One kidney was transplanted to a patient in Wockhardt Hospital. The other could not be retrieved as it was not in healthy. The corneas were sent to an eye bank in Borivali,” Mr. Hirwani said.

In the second case, a 61-year-old man was rushed to Sir H.N. Reliance Foundation Hospital on December 30 due to a brain haemorrhage. He was declared brain dead early on Tuesday. One of his kidneys was transplanted to a patient in the same hospital. The second was sent to Global Hospital.

Overall, the number of cadaver organ donations saw a decline in 2018 as compared to previous years. In 2017 and 2016, the city had recorded 58 donations each. The waiting list of patients for organ transplants has been soaring. At present, there are over 3,500 patients waiting for a kidney, 450 for liver and over 25 patients are waiting for heart transplants. 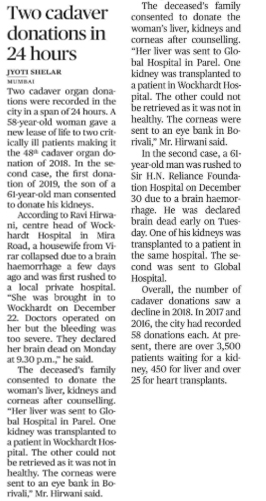